Gypsy moth is native to Europe, Eurasia, and North Africa. It is not established in BC but is widely spreadin the Eastern United States and Canada, including the provinces of Ontario, Quebec, New Brunswick, Nova Scotia, and Prince Edward Island. Canadian and US agencies strive to find and eradicate this pest. While gypsy moth populations are found each year in BC, so far it has not become permanently established.

In their invasive range in North America, Gypsy moths are known to defoliate entire trees by feeding in large numbers. If they were to establish in BC they would likely cause significant economic damage to our forestry and tree nursery industries, as well as on residential properties. 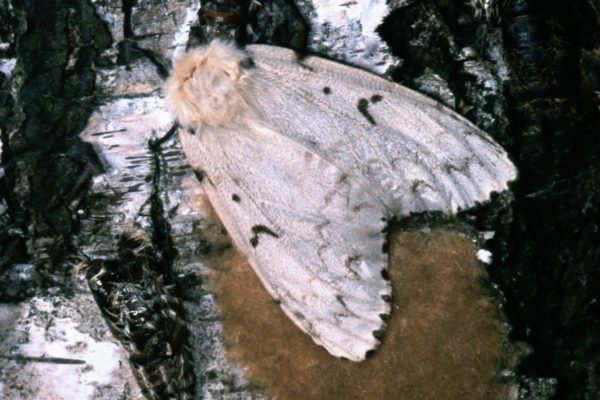 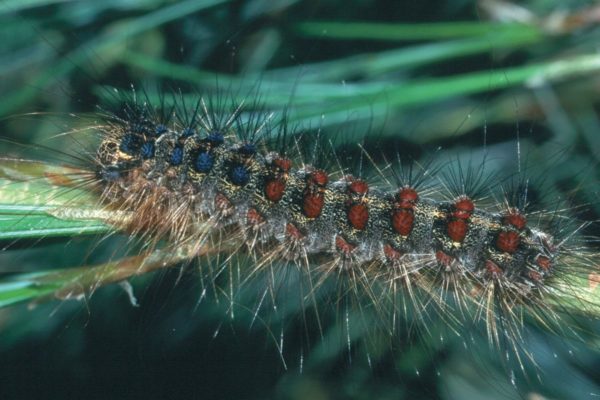 Eggs are laid in a beige mass 3-8 cm in diameter attached to a flat surface, such as a tree trunk or side of a building. Each egg mass may contain 100-1000 eggs. Gypsy moths egg masses may be attached to shipping containers or vehicles, which can spread them to new areas.

Caterpillars are black and brown and 5-10 mm long when first hatched. Mature caterpillars are are up to 6 cm long with two rows of blue and red spots going down their back.