Smallmouth bass are native to Eastern and Central North America, including the Great Lakes. They have been introduced into BC waterways as sport fish, and are found throughout the Okanagan, Thompson, and Kootenay regions, in the Fraser River watershed, the Beaver Creek watershed in the Cariboo, and throughout Southern Vancouver Island.

Smallmouth bass live in freshwater systems, including streams, ponds, rivers, and reservoirs. They prefer gravel with little aquatic vegetation and can be commonly found in sheltered areas under logs and docks. Female Smallmouth bass can spawn several times in a year, as long as water temperatures stay above 15 °C. She will produce up to 10,000 eggs each time she spawns.

Smallmouth bass are predators, and feed on smaller fish, amphibians, and aquatic insects. They have been known to deplete waterways of smaller fish and are considered a serious threat to native animals in the waterways they inhabit, including juvenile salmon.

Smallmouth bass grow to 25-40 cm long, and have a flat, oval body with a pointed face. They are grey-green in colour with dark vertical stripes and a white belly. They have two dorsal fins that are fused together – the front fin has pronounced spines while the back fin is round. Their mouth extends to just below the eye.

Smallmouth bass may be confused with the similar Largemouth bass (Micropterus salmoides). Largemouth bass can be distinguished by the dark horizontal line running from behind their eyes to the base of their tail, and by their mouth, which extends past their eye. 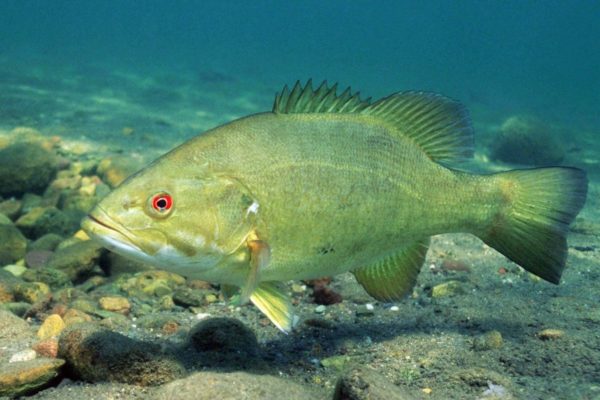 Invasive species are plants, animals or other organisms that are not native to BC, and have serious impacts on our environment, economy and society. Never release your plants and animals into the wild or dump aquariums or water garden debris into rivers, streams, lakes or storm sewers!