Imagine swimming on a hot summer’s day in a cool, refreshing lake in BC. Now imagine being surrounded by hundreds of jellyfish.

Not exactly what you’d expect but that’s what you may experience in Killarney Lake in Saanich, BC on Vancouver Island.

Freshwater jellyfish (Craspedacusta sowerbii), also known as peach blossom jellyfish, originated from the flood areas of the Yangtze River in Southeast Asia. How they arrived at Killarney Lake remains a mystery. They have now spread over much of Asia, Europe, South and North America, Australia, and some parts of Africa. Researchers believe their expanded distribution is an effect of warming temperatures, and climate change.

While records indicate this species had already been discovered in Canada in Ontario and Quebec, freshwater jellyfish in BC were first reported in Killarney Lake in 1990. Since then, community scientists passionate about reporting their community observations, have detected this species in more than 30 BC lakes.

This is all part of the research currently being conducted by Florian Luskow, a Ph.D. candidate in the Department of Earth, Ocean & Atmospheric Sciences at the University of British Columbia.  Florian will be completing his program by the end of this year. He has applied for a postdoctoral project and hopes to continue exploring this topic and expanding his research efforts.

Florian has been studying marine gelatinous zooplankton – e.g., jellyfish, comb jellies, etc. – since 2011. After reading some articles about freshwater species and their global distribution in 2020, he realized that while jellyfish were primarily located in tropical to warm-temperate latitudes, they were increasingly moving further north.

“A quick web search showed that the scientific literature on this topic was almost non-existent, whereas social media reports and blogs talked about it a lot. This discrepancy motivated me to go out and search myself for these cryptic creatures,” said Florian.

“During my undergrad studies, many people focused on fish, aquaculture, and macroalgae. All these groups are commercially of value, whereas other groups – such as jellyfish – are traditionally considered nuisance. As my dissertation focuses on the hidden diversity of marine gelatinous zooplankton (jellyfish), it was natural for me to extend this interest to lake systems and their inhabitants, about which we still know almost nothing.”

Studying this species at this latitude in BC waters, Florian predicts we will see more of them in the future.

“It is especially interesting to study freshwater jellyfish here, as 50°N currently marks their northernmost distribution range in North America. We can expect them to show up in new sites and build up larger populations that eventually will persist longer in the season. With this, their impact on food webs and nutrient cycles will increase.”

Like other jellyfish, this species uses its tentacles to sting and paralyze small fish. While they are not harmful to humans, freshwater jellyfish may be a concern for freshwater lakes. More research will tell.

“At the moment, it is very difficult to estimate their impact on fish populations as experimental evidence is scarce and the findings are contradictory. More research is required to determine how ecosystems will be affected,” said Florian.

Florian’s research also seeks to understand the tolerance levels of this jellyfish in freshwater systems.

“We are trying to understand the conditions under which freshwater jellyfish reproduce, and what will limit their growth, feeding, and reproduction. Only after we have gained knowledge about these aspects, we can start developing strategies to contain this species to protect local biodiversity. Until then, we have no chance to stop their spread,” he said.

Freshwater jellyfish are usually smaller than a thumb nail in size. If you see one, report it. Contact Florian at: [email protected] , 236-818-6221, on Twitter @FLuskow, or  report the sighting to ISCBC. 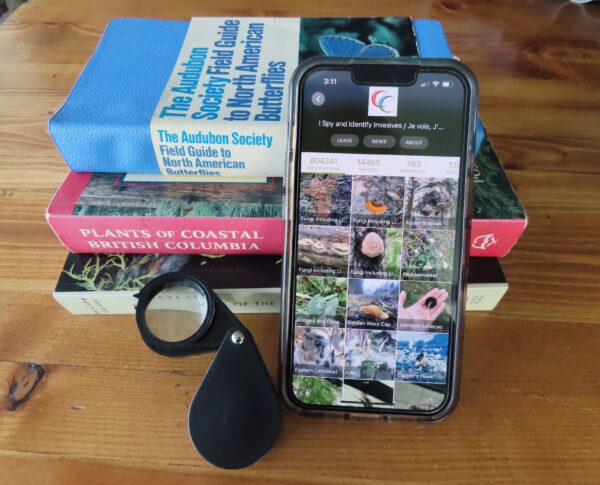