The protection of endangered species is critical to restoring biodiversity, especially in places where there is an infestation of invasive species. Our Stronger BC Action Teams have been hard at work removing various invasive species around the province and, along the way, they have found some interesting endangered native plants.

The Nanaimo Action Team and Campbell River Action Team met up at Oyster Bay Shoreline Park, a coastal meadow near Campbell River from May 3-5, 2022 to remove Scotch broom (Cytisus scoparius), Himalayan blackberry (Rubus armeniacus) and Purple deadnettle (Lamium purpureum). These species have negatively impacted the biodiversity of the park by displacing native plants.

Oyster Bay Shoreline Park is a recovered logging camp marked with sensitive ecosystem signs, as the endangered flower Deltoid balsamroot (Balsamorhiza deltoidei) was translocated here to help recover and replenish the species. Based on their conservation status rank, each species and ecosystem is assigned to the red, blue or yellow list to help set conservation priorities and provide a simplified view of their status. Deltoid balsamroot is an S2 provincially imperiled species that is red-listed, which means it is at high risk of being endangered or lost in the near future. Its current distribution is limited to populations scattered throughout Victoria, Cowichan and Campbell River.

This park is also home to Coastal triquetrella (Triquetrella californica) moss. This is an S1S2 provincially critically imperiled species that is also red-listed. This species’ current distribution in BC is known only in two populations; Campbell River and Galiano Island. It was found on the sandy backshores of Oyster Bay Shoreline Park and had Purple deadnettle encroaching on it, which our Action Teams removed along with Scotch broom and Himalayan blackberry.

In total, the teams removed just under 25 bags of Scotch broom, Himalayan blackberry, and Purple deadnettle.

Across BC, Canada and the world, invasive species pose the second greatest threat to biodiversity after habitat loss. Experience with our Stronger BC Action Teams gives people looking for work in this province skills in invasive species management, setting them up for success in the environmental protection field. The hard work of our Action Teams is greatly appreciated! Check out our website later this summer to read more accomplishments of our Action Teams.

Ksenia is a Community Science Coordinator with ISCBC. She is passionate about nature conservation and taking film photos of the beautiful natural landscapes of BC. You can reach Ksenia at operations.coord@bcinvasives.ca.

Steven Hayward is an Action Team Supervisor for ISCBC working on the ground to remove, manage, and prevent the spread of invasive species on Vancouver Island.

By Ksenia Kolodka & Katie Swinwood | June 9th, 2022 “Working with community scientists gives us a chance to interact with people with a wide variety of perspectives and broaden… 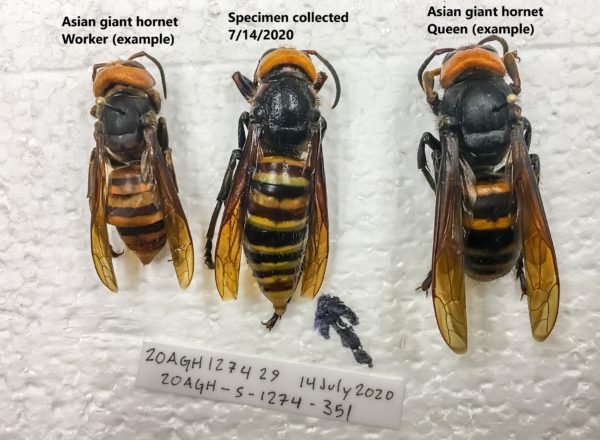 By Janelle Bode | Edited by Jana Rolland | May 09, 2022 We’re not the only ones looking forward to the return of warm spring weather- Northern giant hornets (Vespa…