Zebra and Quagga mussels are freshwater mussels native to the Black Sea in Europe. They have become invasive in Ontario, Quebec, and Manitoba, but have not yet been detected in BC, Alberta, Washington, Oregon, or Idaho. They are primarily spread in North America by recreational boaters.

These mussels thrive in freshwater lakes, ponds, quarries, and reservoirs. Both species have been found as deep as 110 m, but Zebra mussels prefer depths of 2-12 m, while Quagga mussels prefer depths of 10-13 m. They filter-feed on plankton, and can rapidly change the clarity of water bodies through their feeding. This leads to changes in aquatic plant growth, and removes an important food source for many aquatic invertebrates and fish.

Both species are known to reproduce rapidly when introduced into new areas. Unlike native species of freshwater mussels, Zebra and Quagga mussels anchor themselves to surfaces using strong threads and create large colonies that attached to docks, clog water pipes and damage boats. They may colonize shallow beaches, leaving otherwise pristine public spaces covered in sharp shells. Female mussels can produce up to a million eggs each year, and have demonstrated to surviving up to 30 days out of water under ideal conditions. Because of this, it is almost impossible to eradicate these mussels from waterways once they become established, and so the strategy in BC is to focus on prevention.

Zebra and Quagga mussels vary in their body size and colour and may look quite similar. Zebra mussels grow to around 3.5 cm long, while Quagga mussels grow to 4 cm long. They both have a flat edge, giving them a distinct D-shape, and both may have dark banding along the outside of their shells. They can be distinguished from native mussels by the strong threads they use to attach themselves to surfaces.

The Clean Drain Dry factsheet provides a handy chart to help visually distinguish these mussels from native freshwater mussel species in BC. 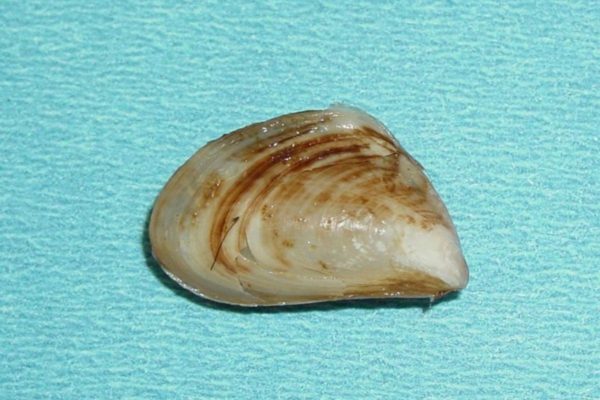