The Virginia opossum is the only species of marsupial found North of Mexico, it is native to Central America, much of Mexico, and the Central and Eastern United States. It was introduced to Washington state in 1925 and has been present in Southern BC since 1949.

Like other marsupials, Virginia opossums keep their babies in pouches. They can have two litters per year, with an average of 6-10 babies per litter. Development time for Virginia opossums is fast with gestation only lasting about 13 days, at which point newborn pups crawl to their mother’s pouch, attach to a nipple, and begin feeding. Just over three months later, the young are completely independent from the mother. Virginia opossums live for up to three years.

Opossums are omnivores, and feed on a variety of small mammals, amphibians, bird eggs, insects, slugs, fruits, and foliage. In urban environments they will eat garbage and pet food that has been left outside. Although Virginia opossum is considered an exotic (non-native) species in BC and has been present for over 60 years, not much is known about its impact on native species. The priority for this species is to prevent its spread to new areas in the province, where it could potentially have unforeseen effects on native ecosystems.

Virginia opossums are around the size of a large cat, and are very distinct from any other mammal in in BC. 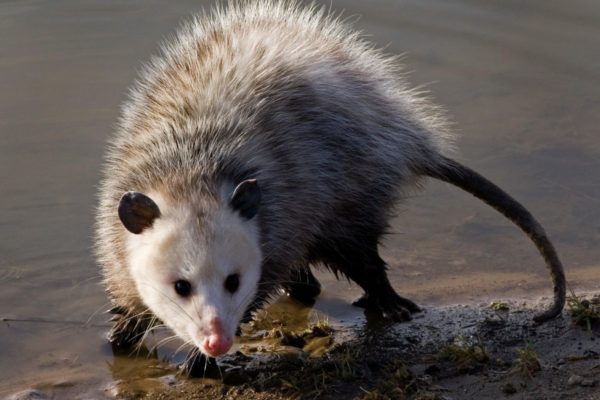