Nutria (also known as Coypu) are native to South America, and have become invasive throughout North America, including Washington, Oregon, and BC. They were originally introduced to the Lower Mainland and Vancouver Island by the fur trade, and are now found throughout the Fraser Valley, Southern Vancouver Island, and on several Gulf Islands.

Nutria live in areas with stagnant water and lots of aquatic vegetation, such as marshes, wetlands, slow-moving streams, and ponds. They prefer freshwater but have been found in brackish water. They are herbivores, and eat a wide variety of vegetation. Nutria can have three litters per year, each with 1-13 pups. Nutria live to be three years old.

Nutria create burrows in soft soil, which damage native wetlands. These burrows can also interfere with agriculture and human infrastructure such as dykes. By feeding on vegetation, Nutria can turn lush wetlands into open ponds, destroying important habitat for native species of wetland animals such as frogs, salamanders, turtles, aquatic insects, and many bird species.

Nutria can reach 60 cm long (not including their 30-45 cm-long tail). They may resemble beavers or muskrats but can be distinguished by their tail and whiskers. Their tail is thin and round, unlike the beaver. They have a white muzzle with long white whiskers, while beavers and muskrats have black whiskers. 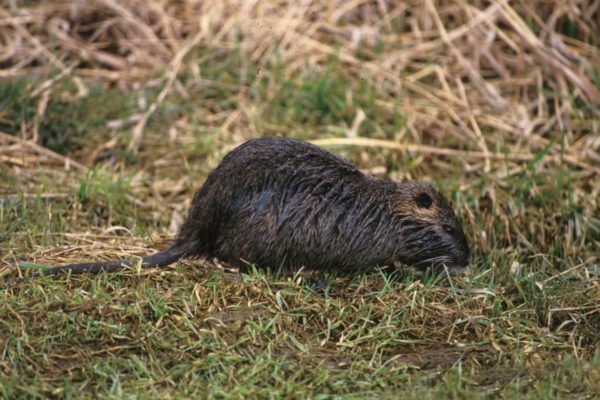