It is thought that the New Zealand mudsnail was transported to North America in the ballast water of ships arriving from Europe and Asia. It was first recorded in North America in the late 1980’s in Idaho’s Snake River and is now widespread in many states including Washington, Oregon, and California. They have been reported at Port Alberni on the west coast of Vancouver Island.

The New Zealand mudsnail can live in a variety of habitats including lakes, rivers, streams, lagoons, estuaries, canals, ditches and water tanks. It can tolerate a variety of water temperatures and conditions but thrive in disturbed watersheds. They are often found living in high densities (greater than 400,000 snails/sq meter) and can disrupt the natural ecology by out-competing native aquatic snails and insects.

In North America, it is believed that the main method of spread of the New Zealand mudsnail has been through recreation boating and fishing. Due to its size and ability to attach to objects, it’s an ideal aquatic “hitch-hiker” that can be unknowingly transported to a new waterbody with ease.

New Zealand mud snails can reproduce asexually, meaning the introduction of a single individual into a new habitat can lead to a full infestation. These snails can survive out of the water for weeks by laying dormant in their shells.

The New Zealand mud snail is a very tiny aquatic snail, less than 5 mm long. The shell is typically light to dark brown in colour but may look black when wet. The shell of adult mud snails usually have 5-6 whorls that lean to the right. They can easily be confused with other fresh water and native snails. 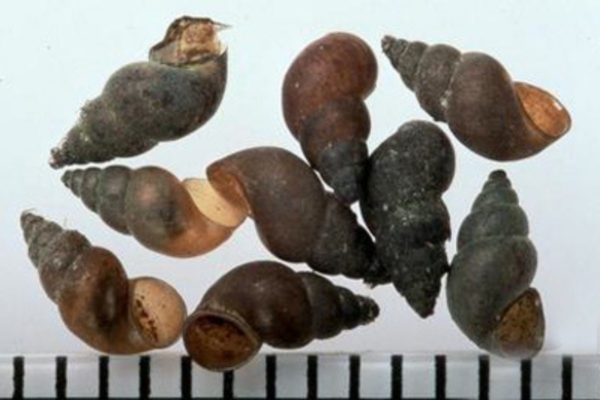