Feral pigs are large animals and can be aggressive towards humans. Treat them with the respect you would have for any other large animal in BC.

Feral pigs are the descendants of domestic pigs that have escaped to the wild and may or may not have mated with wild pigs. It is unclear when they first appeared in BC, but a small population was seen as early as 1990 in the Dawson Creek area. Populations have been reported from the Thompson-Okanagan, Peace, Chilcotin, and Kootenay regions. They have been introduced and eradicated from Vancouver Island.

Feral pigs are large omnivores, and threaten amphibians, ground-nesting birds, crustaceans, small mammals, mollusks, and reptiles. They are a serious threat to BC native wildlife. They damage crops, prey on livestock and can transmit diseases to livestock, such as swine brucellosis.

Feral pigs prefer to live close to fresh water and seriously damage wetland ecosystems by creating mud “wallows”. An adult female pig can produce several litters under ideal conditions, each with 10+ piglets. Once established in an area populations can grow rapidly.

Feral pigs resemble domestic pigs, but their bodies are covered in coarse, dark hair and they may have tusks. Generally, there is variation in the size and colour of these animals, but typically they are brown with males weighing 60-200 kg, while females weigh 35-150 kg. 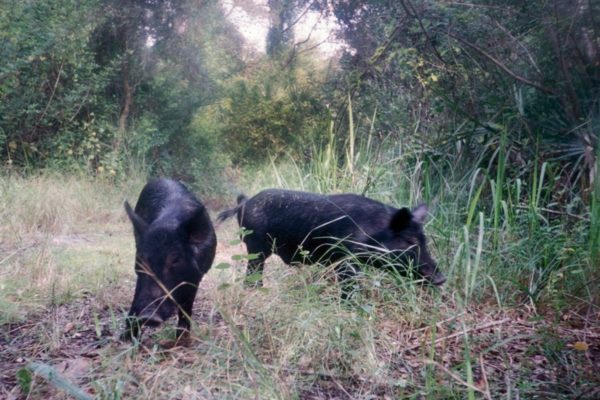