A small number Eastern grey squirrels were introduced species into Vancouver’s Stanley Park in 1909, where they are now a thriving resident. In 1966, several escaped from a game farm on Vancouver Island, where they pose a threat to sensitive Garry oak ecosystems. They have established in the deciduous woodlands of the Lower Mainland, Vancouver Island, and the Southern Interior, primarily in the South Okanagan.

These squirrels compete with native squirrel species and birds for habitat, and feed on bird eggs and nestlings. They are carriers of parapoxvirus, which may infect native squirrels and some livestock.

Eastern grey squirrels dig up of lawns and gardens, chew through electrical wires, eaves and shingles, and nest in roofs, attics, and chimneys. The squirrels damage fruit and nut trees and vines chewing and stripping bark.

The Eastern grey squirrel is one of seven mammals among the 173 invasive species identified by the Garry oak Ecosystem Recovery Team (GOERT) as a species of concern to Garry oak and associated ecosystems. These areas are home to more plant species than any other terrestrial ecosystem in coastal BC, and many of these species occur nowhere else in Canada. It prefers the tips of the acorns of some oaks, including Garry oaks, which may slow regeneration. They also damage and kill trees by stripping the bark.

Eastern grey squirrels have dark to pale grey backs that may be brushed with cinnamon on hips, feet, and head. Ears are buff to grey to white, and its tail is white to pale grey. 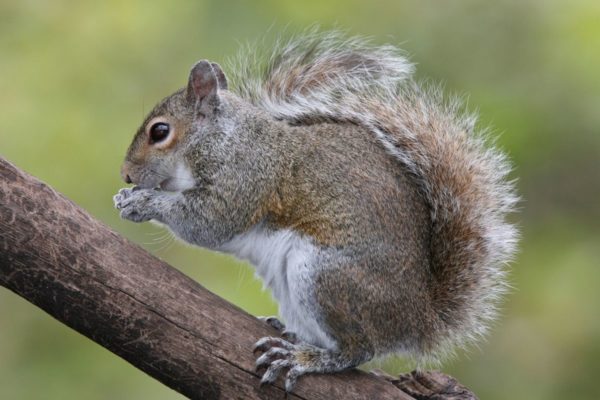