Brown marmorated stink bugs were first seen in BC in Chilliwack in 2016, and have since spread throughout the Lower Mainland, to the Okanagan Valley, and to Brentwood Bay on Vancouver Island. These bugs are known to hitchhike long distances on vehicles.

These stink bugs are herbivores with a broad diet, they are known to eat fruits, seeds, green plants, and even tree bark! In other parts of North America, these bugs have become a serious pest in many crops, including apples, peaches, sunflowers, bell peppers, grapes, hazelnuts, and many more. They have straw-like mouthparts, which they use to inject digestive juices directly into the plant tissue. This causes bruises and blemishes on unripe fruits and a wound that may become infected, making fruits unappealing to eat.

Brown marmorated stink bugs are considered nuisance pests in human homes. During the fall and winter, these bugs like to hibernate in wooden structures, and will come together in large numbers, so that an individual home may host hundreds, or thousands of bugs.

In 2018, scientists working at the Agriculture and Agri-Food Research Center in Agassiz found the parasitoid wasp Trissolcus japonicus attacking Brown marmorated stink bug eggs in Chilliwack. This tiny wasp is also a non-native species, it comes from the same parts of Asia where the stink bug is native, and was likely brought over accidentally along the same routes as the stink bug. This wasp is now helping to control Brown marmorated stink bug populations in BC.

Adult Brown marmorated stink bugs are 1.5 cm long with a distinct ‘shield’ shape. They can be distinguished from other species of stink bugs in BC by the two small, white stripes on the ends of their antennae, a single white stripe on each leg, and the white and black spots at the base of their abdomen.

Immature stink bugs look very similar to full adults but lack wings. Like the adults, they have two small, white stripes on their antennae, a single white stripe on each leg, and a fringe of white and black spots at the end of their abdomen. 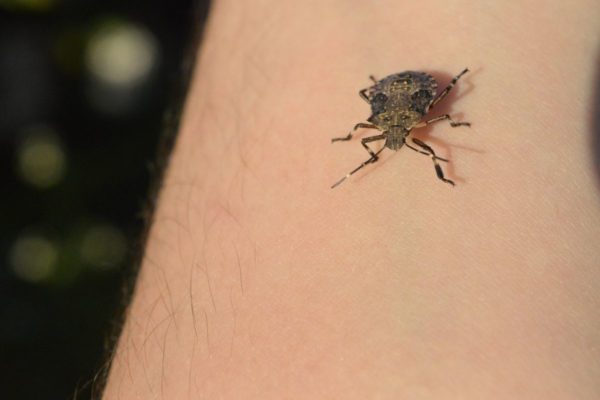